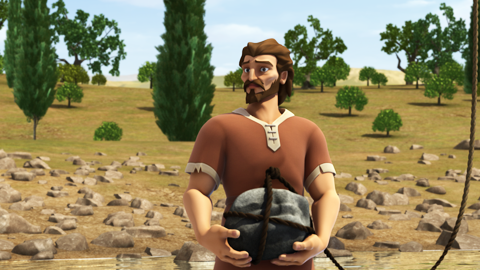 Peter was one of Jesus’ twelve disciples. His father’s name was John (Matthew 16:17, John 1:42), and the family probably lived at Capernaum on the northern shore of the Sea of Galilee (Mark 1:21), although it is possible they came from Bethsaida (John 1:44).

When Peter’s brother, Andrew, brought him to Jesus, Jesus changed his name to the Greek name, Peter from Simon (in Aramaic, “Cephas”), which means “rock.” At times, Peter did not appear to be “rock-like,” but the name probably referred to something that, by the grace of God, he would become (Matthew 16:17-19).

We know Peter was married because the gospels mention that Jesus healed his mother-in-law (Mark 1:29-31, Matthew 8:14-15), and later the apostle Paul mentioned that Peter took his wife on his missionary travels (1 Corinthians 9:5).

Peter and Andrew were fishermen on the Sea of Galilee and were possibly in partnership with James and John, the sons of Zebedee (Luke 5:10). When Jesus called Peter to follow Him, Peter’s life took a completely different direction. He became a “fisher-of-men” (Matthew 4:18-20).

When Jesus called his disciples (learners or apprentices) to be apostles (commissioned representatives), Peter was named first among them (Mark 3:14-16).

Peter was a strong individual who was often the spokesman for the disciples. He became their recognised leader (Mark 1:36, Luke 22:32). He had a dominant personality and so we find him being the one who climbs out of the boat to walk to Jesus (Matthew 14:28) and the one who asks Jesus the question about forgiving another who sins (Matthew 18:21). He was also the first disciple to recognise Jesus as the Messiah (Matthew 16:13-17), and with his impulsive nature, he was the one who drew his sword and cut off the ear of the high priest’s slave when Jesus was arrested in the Garden of Gethsemane (John 18:10).

During Jesus’ Last Supper with his disciples, Jesus predicted that Peter would deny knowledge of Him, stating that Peter would disown him before the rooster crowed the next morning. Peter replied, “Even if all fall away on account of you, I never will.” “I tell you the truth,” Jesus answered, “This very night, before the rooster crows, you will disown me three times.” But Peter declared, “Even if I have to die with you, I will never disown you.” And all the other disciples said the same. Unfortunately Peter did deny knowing Jesus 3 times and this event in his life affected Peter in a tremendous manner.

In Luke 22:31, Jesus revealed to Peter that Satan had asked for permission to sift Peter like wheat. Jesus could have protected Peter and not allowed Satan to sift him, but Jesus was equipping Peter to strengthen his brothers (Luke 22:32). Not only did Peter strengthen the other disciples after Jesus restores him in John 21, Peter also became a pillar in the early church, training, and encouraging others to follow the Lord Jesus. God used Peter’s failures to turn him from Petros, which means “small stone,” into Petra, “the Rock.”

Peter became the leader of the emerging church. The man who once denied Jesus then preached openly to crowds and in the Temple (Acts 1:14-41, Acts 3:12-26). Through the power of the Holy Spirit, Peter performed miracles. He healed a cripple beggar (Acts 3:1-11) and many others (Acts 5:12-16). He was imprisoned for preaching about Jesus, but he escaped miraculously (Acts 12:6-19).

After seeing a vision, Peter was the first to take the gospel to the Gentiles (Acts 10), and he played a key role at the council of Jerusalem (Acts 15, Galatians 2), which decided the Gentiles could become church members without first becoming Jews.

Peter wrote two letters, often called epistles, 1 Peter and 2 Peter, in which he encouraged the readers who were facing persecution and suffering for their faith and urged them to live as people who belong to Christ. According to early Christian tradition, Peter died in Rome.

• Keep following Jesus, even if you stumble along the way.
• Jesus accepts us in spite of our failures.
• Jesus knows what we can become.