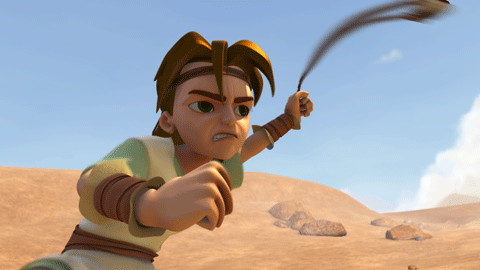 David was the youngest of Jesse’s eight sons. David obeyed his father and carried out his family responsibilities. During his life he was a shepherd, musician, poet, soldier and king. He was a pretty busy fellow, for real. Samuel anointed him as king but it was many years before he actually became leader of Israel (1 Samuel 16).

David went into the service of King Saul and his music helped to calm the troubled ruler (1 Samuel 16).

David became a successful soldier after his famous defeat of the giant Philistine named Goliath. King Saul was jealous of him and tried to kill him. Michal, David’s wife (who was also Saul’s daughter) helped him escape (1 Samuel 19:9-24).

David and Jonathan, Saul’s son, became best friends. They made a pact to always be there for each other. When Saul was determined to kill David, Jonathan helped him escape (1 Samuel 18, 1 Samuel 20).

Saul became obsessed with wanting to kill David, and he spent many years chasing him. On two occasions, David could have killed Saul, but he did not because he knew Saul was God’s anointed king (1 Samuel 24, 1 Samuel 26).

After Saul’s death, David was anointed King over Judah, and then King over all Israel (2 Samuel 2, 2 Samuel 5).

David trusted and believed in a faithful and forgiving God, and when he sinned, he admitted his mistakes, confessed his sin, and received forgiveness. When he committed adultery and murder, his confessions and repentance were genuine, but he still had to face the consequences of his sin (2 Samuel 11, 2 Samuel 12, Psalms 51).

The Bible describes David as “a man after God’s own heart” (1 Samuel 13:14, Acts 13:22). During David’s reign as king, he asked God to bless him and his family. His dynasty continued forever, because one of his descendants was Jesus Christ. (Read his prayer in 2 Samuel 7:29.) David was the greatest king of Israel and a part of Jesus’ family!

• Trust in God. He has the power to help you when you are faced with a challenge.
• Admit your mistakes, confess sin, and receive forgiveness, but understand that sin has consequences.