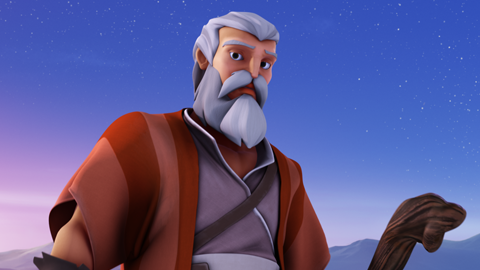 Moses, the son of Amram and Jochebed (Exodus 6:18-20), was a Hebrew who was born at the time when a cruel Pharaoh wanted to prevent the Hebrew population from increasing. Pharaoh ordered that no more male Hebrew children should be allowed to live. Moses’ mother, however, hid him and then placed him in a basket on the River Nile where Pharaoh’s daughter found him. The princess decided to adopt the baby and bring him up as her son. His own mother was able to look after him until he was old enough to live in the palace. In these early years, Moses was taught the faith of his ancestors (Exodus 2:1-10).

Although Moses had a privileged upbringing in the palace, he never forgot his own Hebrew people. He wanted to help them, but when it was discovered he killed an Egyptian, he had to flee for his life. He went to live in Midian where he met Jethro and worked as a shepherd. Moses married Zipporah, one of Jethro’s seven daughters. He spent forty years there in exile before God spoke to him through a burning bush. God called Moses to lead His people out of bondage and out of Egypt. After making several excuses, Moses finally obeyed and went with Aaron (his brother) to Egypt. Before Pharaoh allowed them to leave, the Egyptians experienced the ten plagues – and God’s power.

Moses led God’s people across the Red Sea. And then for forty years, he led them through the wilderness. He ultimately led them to Mount Sinai where God had spoken to him from the burning bush (Exodus 3:12). During the long journey, the people began to murmur and complain. They soon forgot the trials in Egypt. They kept looking back and thinking that life was harder in the wilderness than when they were in bondage. Moses, however, patiently focused on his mission. God miraculously provided the manna and the quail (Exodus 16) to feed the Israelites in the wilderness.

When Jethro, Moses’ father-in-law, gave him sound advice on how to prevent burn-out and to lead the people better, Moses delegated responsibility to subordinate rulers who would judge the people in small cases (Exodus 18).

When the Israelites arrived at Mount Sinai, Moses went up into the mountain to meet with God. The Lord appeared in a terrific storm with thunder and lightning and a thick cloud (Exodus 19:6). During His encounter with God, Moses received the Ten Commandments and founded the religious community known as Israel (Exodus 20). Through the Law, Moses taught his people all that the Lord expected of them. They were to be a holy people, separated from the surrounding pagan, idol-worshiping tribes, a people who put God first and who followed His rules.

When the Israelites finally arrived at the Promised Land (Canaan), Moses’ work was done. However, he was not allowed to enter the land as he had disobeyed God previously (Numbers 20:1-13). Moses renewed the Sinai Covenant with the survivors of the wanderings in the wilderness, praised God, and blessed the people, tribe by tribe (Deuteronomy 33:1-29). Then he climbed Mount Nebo, viewed the Promised Land, and died. The Israelites never saw him again, and the circumstances of his death and burial remain a mystery (Numbers 34:1-8).

• You don’t have to be perfect for God to use you to help others.
• You can do difficult tasks for God because He has promised to be with you.
• Allow God to shape your personality through experience and your relationship with Him.
• Focus on God and solutions, not on problems.
• Trust God to provide what you need.